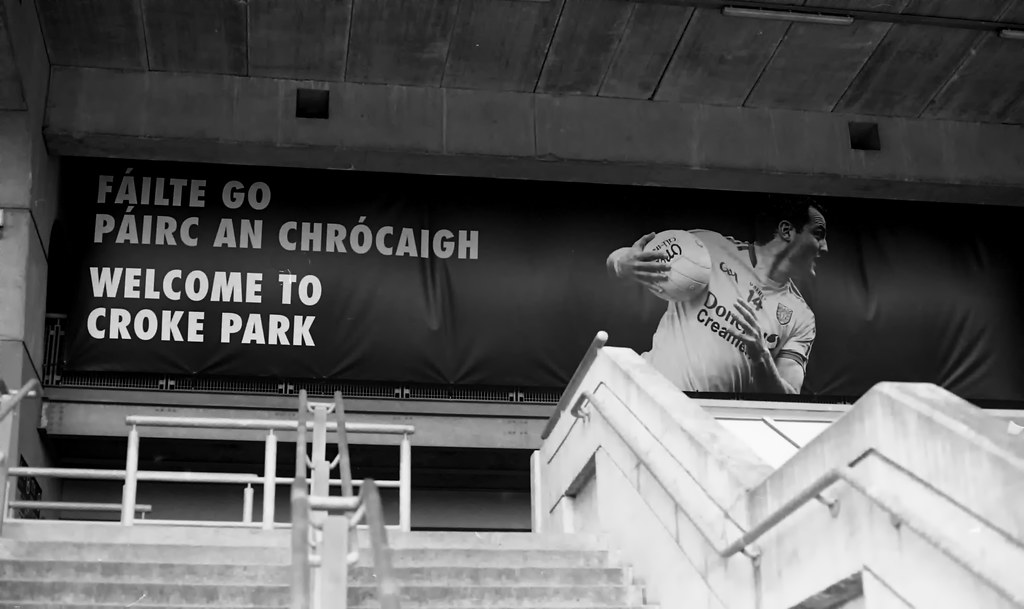 For those born into a particular community in Northern Ireland, one tends to follow a certain ‘conditioning’ in what’s ‘ours’ and what’s ‘theirs’. If the community is the British facing one, then in my experience there’s a lot to miss out on during one’s formative years and beyond.

One large cultural gap in my life experience was that of the world of Gaelic sports – the GAA and its components of football, hurling and camogie. Thankfully that has been rectified and I enjoy going to a gaelic football or hurling game almost as much as going to a (proper) football match.  (‘Soccer’ is not a word I care for…)

A must-see on any visit to Dublin is a guided tour of Croke Park and the GAA museum.  The sport itself is dynamic, athletic and with an admirable amateur ethos at its core –  and a history and culture inextricably linked with the evolution of the Irish state.

I took a visit out of season with a roll of Tri-X loaded in that neglected design icon of the 1980s, the Canon T70.

The GAA has a presence throughout Irish society where the sports are at the heart of community.  The role of the clubs can be seen throughout the ground and museum.

Michael Cusack, the GAA founder – marked by statue and stand.

Hill 16  – once named Hill 60 based on an Irish regiment of the British Army – renamed to reflect the legacy of 1916.   No  large stand at this end – it’s in a residential area after all.

The museum itself is one of the best presented sports museums I’ve visited.

Many stadia and clubs have tours and a museum although perhaps only Nou Camp in Barcelona  compares with Croke Park in having a historical context and cultural significance beyond the sport itself.