Rome was everything I thought it would be – magnificent in its ruins, churches, history and people.  I’ll go again, maybe in autumn when the heat isn’t as crazy.  The sites, streets, piazzas are all undeniably photogenic and maybe in less tourist-heavy seasons, I’d take a more measured photowalk round the numerous easily walked.  Here’s some random shots of Rome.  Shots taken on the Ricoh KR5 and Lomography Earl grey 100 film. 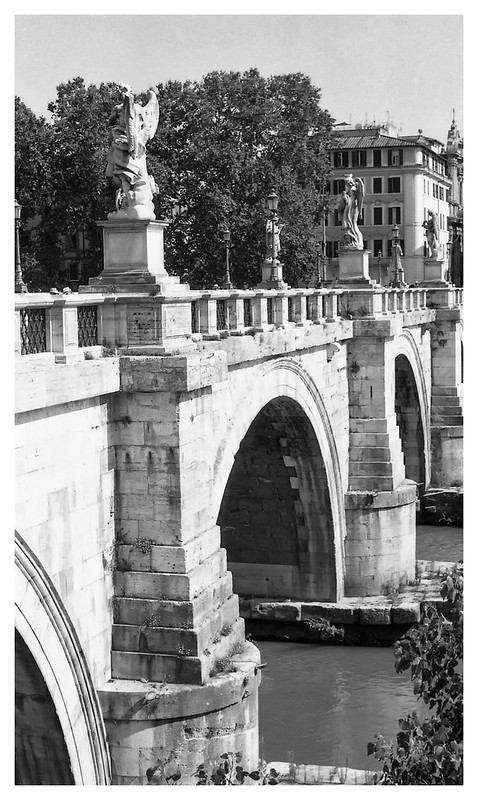 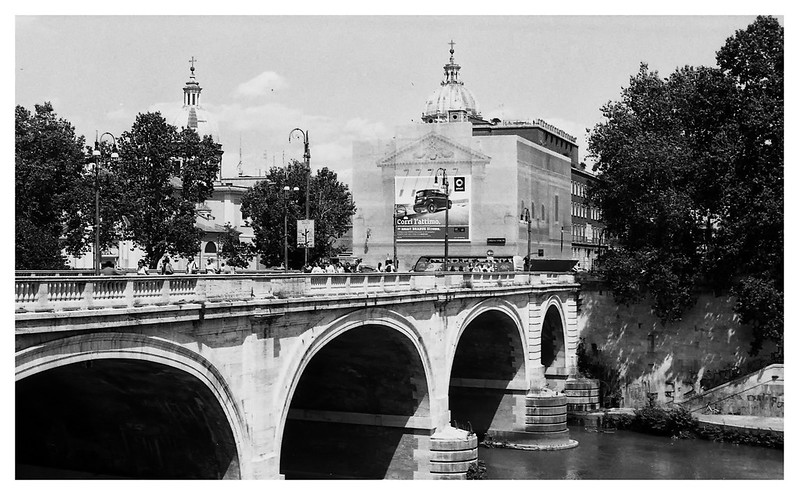 That’s Latin for Vatican City, the Catholic Church’s city state in downtown Rome.  Now I’m not one for religion of any shape nor of certain religions’ supra-earthly claim of superiority over actually-very-earthly things.  The Catholic Church in particular has been on dodgy ground over many things in the last two millennia yet it still has unfathomable status in the lives of people and nations around the world.  And at the Vatican, it has established an undeniably photogenic tourist trap.

St. Peters Basilica  – and the Square  – is magnificent. From every angle. 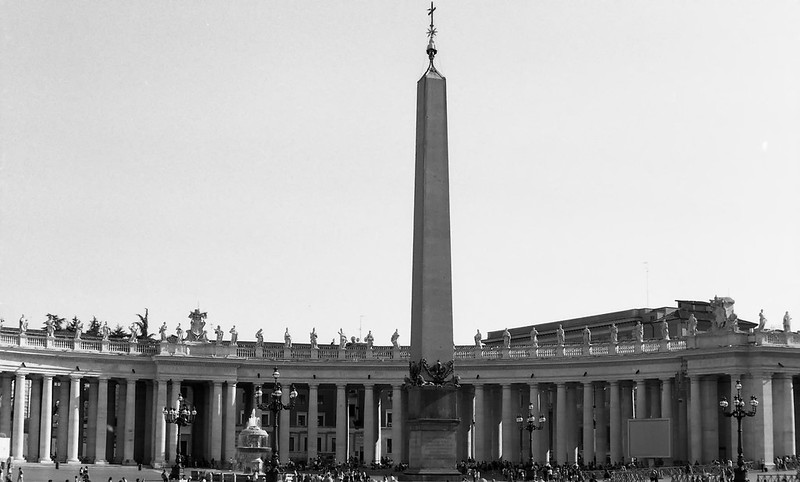 It’s not all Catholic mysticism, history and solemnity.  Vatican as a city state has to function like cities.  There’s a post office.

And everything for the Tourists, of course.

Now – a bit of a personal beef.  The security at the entrance of St. Peter’s Basilica wouldn’t let me in.  Why?  I was wearing the wrong shorts.  Now they were waving by all sorts of folks in summer attire – male/female, shorts, skirts all at several levels of skimipness.  My pale, inoffensive yet atheist legs however were banned.  I tried discussing the logic of this in light of the appearance of numerous others, I channelled a bit of Wallace and Gromit referencing The Wrong Trousers but to no avail.  So I hung around for a few minutes and mingled in with a tour group to gain access.  There’s also a ban on photography which is almost univerally ignored.  Including myself with the phone.

There is of course the other side of the Catholic Church and its history that isn’t on full view.  A rather innocuous looking building is the Palace of the Holy Office.  Or.. The Inquisition.

And of course there is the history of the highly dodgy Popes. I’m thinking the Borgias and in particular Pope Alexander VI, a gent who made Tony Soprano look like Winnie the Pooh. But his tomb is not on view in St Peter’s with the numerous other Popes’. He can however be found about 15 minutes away, in the Spanish national church of Santa Maria in Monserrato degli Spagnoli. But I tracked him down, and there was no issue with the legs. Maybe he wasn’t that bad a Pope.

The Vatican and Catholic presence in Rome is great to visit and is visually and historically fascinating.  But I find the overblown sense of self-aggrandizement a bit grating given the mixed history and lust for power that the Vatican represents.

A few practicalities – don’t go early, everyone does this to beat the crowds so there are very large crowds.  Mid afternoon is a bit less frenetic.  And make sure leg-wear goes to below the knees.

Most of us call it The Colosseum or Coliseum, Colosseo if you’re Italian or if you really want to push the boat out – Anfiteatro Flavio.  We all know what it is when we see it – the big round ruined stadium in Rome, a classical Hampden Park but probably having seen less violence.  It’s instantly recognisable yet still a must-see when in Rome.

As mentioned in a previous post, there are big long queues with no shortage of touts offering beat-the-line offers at inflated prices.  Or you can book online to beat-the-line and still pay over the odds.  So worth saying again – go to the ticket office at the Forum and get a combo ticket, go to the Forum first and then walk straight by the queues into the Flavian Amp..  Colosseum. 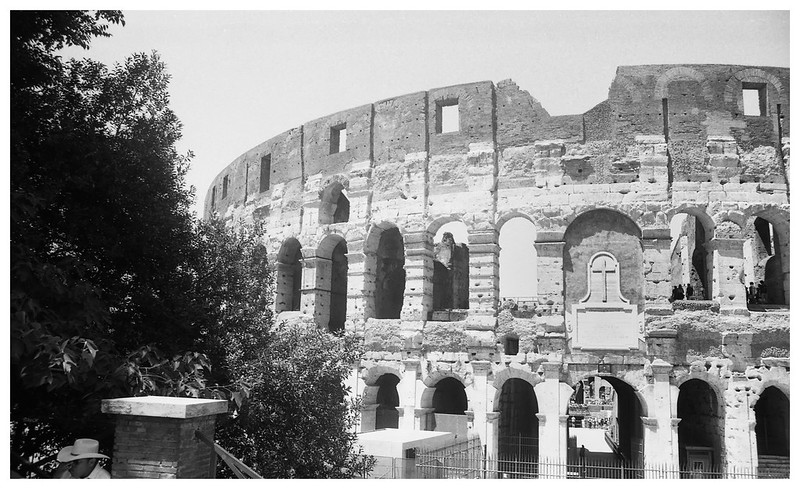 Inside it gets no cooler, and you get an idea of the scale of the arena. 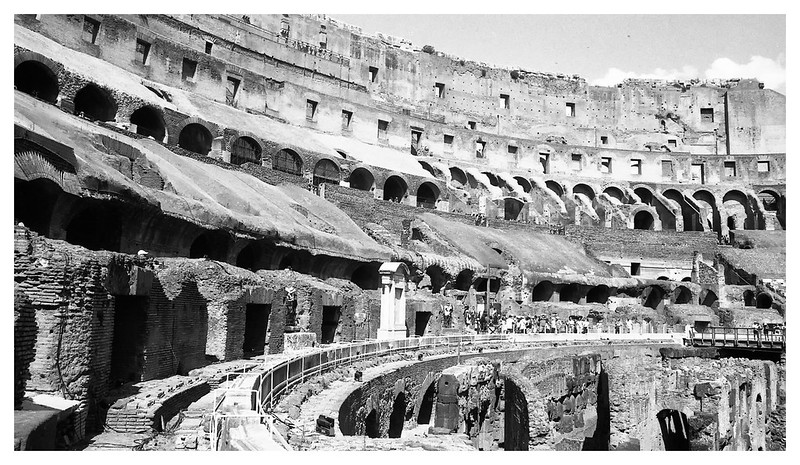 Like many places in Rome there’s free drinking water from fountains.  In a queue, an Enlgish couple were behind me discussing the visit.  She was disappointed and underwhelmed – it was, she said ‘a bit ruin-y’.  Can’t argue with that though I would add ‘magnificent’ 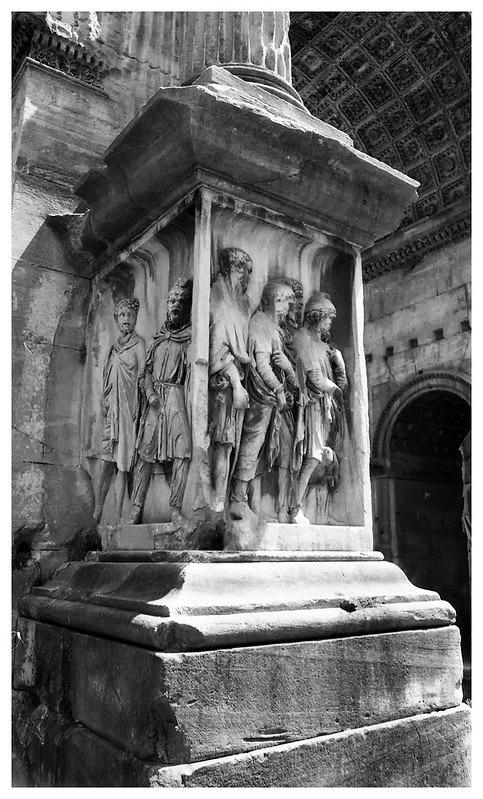 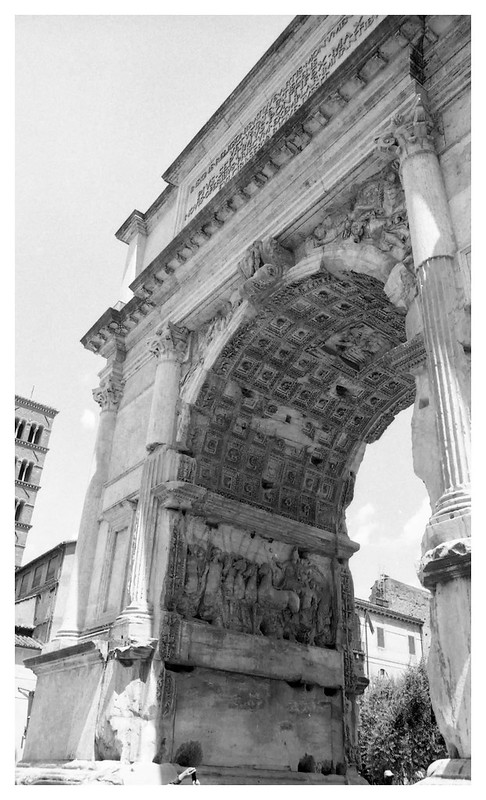 Romans  – the current ones, not the ancients – are more often than not a stylish lot as are many of the tourists, at least not the sweaty football shirt-wearing middle-aged Irish ones.    And like Paris, it’s easy to snap a more flattering street shot when you’re in such beautiful and iconic surroundings.

When you get to a certain age, holidays should be a time for rest and relaxation. So this summer I decided to backpack from Rome to Munich over 3 weeks with an old film camera.  The robust Ricoh KR5 with a few K-mount lenses was the kit of choice with a Vivitar V3000 body as backup although this became quickly irrelevant when the back of the Vivtar fell off in transit.

I did have a digital option – a Fuji X20 compact and a Huawei phone – but the aim was to capture the holiday on monochrome film and with no specific photographic objective in mind other than always having the camera with me.  So first stop was a few days in Rome.  While with some cities it’s often a struggle to convey a visual identity, Rome has no such problems exuding a certain cool.  And on every street, you’ll find scooters – Vespas.

It’s worth mentioning that the traffic in Rome is bloody awful and this pale middle-aged northern European would look ridiculous wobbling around the Roman vias with a well reduced life expectancy.  Unlike the natives, however who have a natural born ability to safely navigate the eternal city while remaining the smartest looking people in Europe.

Photos shot on the Ricoh KR5 on Oriental Seagull 100.